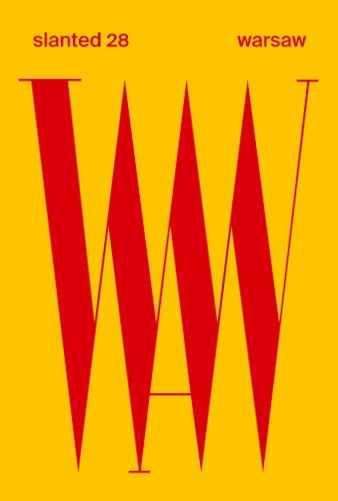 Once known as Paris of the North, the capital of Poland ceased to exist only to rise like a phoenix from the ashes.
This summer, Slanted dips into the refreshing deep pool of contemporary design made in Warsaw.
Design in Poland was carved by the Polish school of poster art that was shaped by legendary graphic designers, painters, architects and artists such as Henryk Tomaszewski, Tadeusz Trepkowski, Jan Lenica, Roman Cieslewicz, Walerian Borowczyk, Franciszek Starowieyski, Waldemar Swierzy, Wojciech Fangor, Franciszek Starowieyski, Roslaw Szaybo, Maciej Hübner, Mieczyslaw Wasilewski, and many others.
In Communist Poland, art and culture enjoyed a surprising amount of freedom: After the end of the Stalin era in 1956, Big Brother's grip on the country loosened. Greater freedom was permitted in art, literature and the theatre and support was given to cultural events and art schools. There was a tremendous upsurge in creative output. In 1966 the first »International Poster Biennale« was held and in 1968 the world's first poster museum was opened in Wilanow near Warsaw.
But where there is art, there is also protest. For artists it was a constant testing of the borders - just how much criticism of the poorly functioning state-run economy was possible? It was a time in which the Polish poster excelled for its intelligence and wit. Following the collapse of Communism in 1989/90, the flow of money stopped.
Advertising looked to the West for direction, the benefits of uniformity arrived in Poland. Since then, a lot changed !