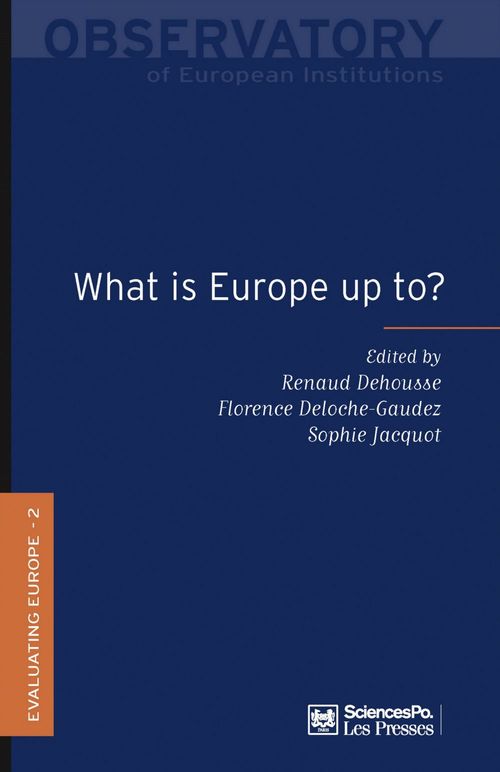 What is Europe up to ?

What is Europe up to? In what areas is it taking action? Is it meeting the expectations of its citizens? These are all legitimate questions in the run-up to the European elections, questions that, all too often, prompt ideological responses.
Who's in charge of "Europe"? Such is the power-sharing within the Union, what with the Members of the European Parliament, the Barroso commission, the country holding the EU Presidency, the ministers of the member States, it is hard to ascertain the responsibility of a specific actor or institution.
Comparisons with the United States or with France confirm that Europe remains "different" from a State. The comparison between what Europe is actually doing and what Europeans expect it to do, does expose a troubling discrepancy.
Based on a strict assessment of the activities of the European Union, this work helps to better understand the policies of European institutions, their issues and priorities, and the way in which they take on board the concerns of its citizens.
List of contributors: Sylvain Brouard, Giuseppe Ciavarini Azzi, Olivier Costa, Renaud Dehousse, Florence Deloche-Gaudez, Ana Mar Fernández, Emiliano Grossman, Sophie Jacquot, Nicolas Monceau.
Without equivalent on a national or an international level, the "Evaluating Europe" series draws on innovative and previously unpublished data produced by the Observatory of European Institutions (OIE), set up by the Centre for European Studies at Sciences Po with the aim of giving fully-informed access to the European debate for all.