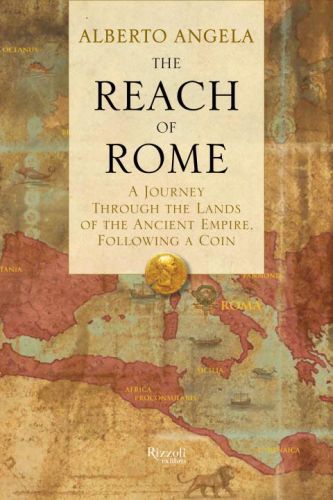 The Reach of Rome

In this unconventional and accessible history, Italian best-seller Alberto Angela literally follows the money to map the reach and power of the Roman Empire. To see a map of the Roman Empire at the height of its territorial expansion is to be struck by its size, stretching from Scotland to Kuwait, from the Sahara to the North Sea. What was life like in the Empire, and how were such diverse peoples and places united under one rule? The Reach of Rome explores these questions through an ingenious lens: the path of a single coin as it changes hands and traverses the vast realms of the empire in the year 115. Admired in his native Italy for his ability to bring history to life through narrative, Alberto Angela opens up the ancient world to readers who have felt intimidated by the category or put off by dry historical tomes. By focusing on aspects of daily life so often overlooked in more academic treatments, The Reach of Rome travels back in time and shows us a world that was perhaps not very different from our own. And by following the path of a coin through the streams of commerce, we can touch every corner of that world and its people, from legionnaires and senators to prostitutes and slaves. Through lively and detailed vignettes all based on archeological and historical evidence, Angela reveals the vast Roman world and its remarkable modernity, and in so doing he reinforces the relevance of the ancient world for a new generation of readers.