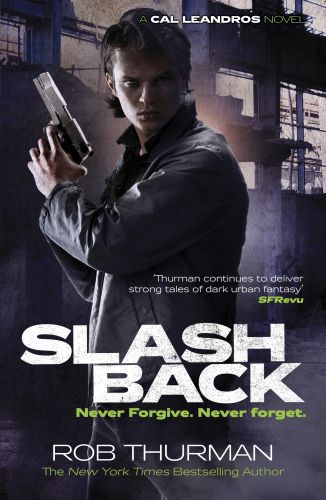 The eighth book in the Cal Leandros series that began with Nightlife, Slashback is clever, ironic and hugely entertaining urban fantasy in the vein of Jim Butcher by the New York Times bestselling author, Rob Thurman.I stopped and let them circle me, first because it was intriguing and, second, because, honestly, what could they do? Only knives, but all armed, and that made them even more interesting. Interesting. Fun.Play-time...Taking on bloodthirsty supernatural monsters is how Caliban and Niko Leandros make a living. But years ago - before they became a force to be reckoned with - the brothers were almost victims of a very human serial killer. Almost. Unfortunately for them, that particular depraved killer was working as apprentice to a creature far more malevolent - the legendary Spring-heeled Jack. He's just hit town. He hasn't forgotten what the Leandros brothers did to his murderous protégé. He hasn't forgotten what they owe himAnd now they are going to pay . . . and pay . . . and pay . . .
A dark contemporary fantasy with a humorous edge, Rob Thurman's Slashback should not be missed.Praise for Rob Thurman:'Supernatural elements put this in the company of Jim Butcher and Charlaine Harris' SFRevu'A roaring rollercoaster of a read . . . it'll take your breath away' Simon R. GreenRob Thurman lives in Indiana, land of rolling hills and cows. Lots and lots of cows. Nightlife, Moonshine, Madhouse, Deathwish and Doubletake, the previous novels in the Cal Leandros series, are also published by Penguin. Visit Rob at www.robthurman.net.